David is a 1968 graduate of Worsham College of Mortuary Science in Chicago, Illinois and is a licensed funeral director in Iowa and Illinois. He is a member of the Iowa Funeral Director's Association and the Mississippi Valley Funeral Director's Association. In addition, he is a member of the Bettendorf Rotary Club, the Bettendorf Lions Club and Asbury United Methodist Church. He & his wife, Donna have two children, Christy Weber and Jon Chambers.

Jon is a graduate of Rock Island High School and a 2002 graduate of Worsham College of Mortuary Science in Wheeling, Illinois. He is a licensed funeral director in Iowa and Illinois and is a licensed life insurance producer in Iowa. Jon is a member of the Iowa Funeral Director's Association, the Mississippi Valley Funeral Director's Association and the Lions Club of Eldridge, Iowa..  Jon and his wife, Debra, have two daughters and a son.

Mindi is a graduate of Augustana College, Rock Island, IL and a 2008 graduate of Worsham College of Mortuary Science, Wheeling, IL..  She is a licensed funeral director and embalmer in Iowa and Illinois, as well as a licensed life insurance producer in Iowa. Mindi is a member of the Mississippi Valley Funeral Director's Association.  She and her husband, Don,  enjoy spending time with family, friends, and their two dogs, Rosco and Echo.

Dan joined McGinnis-Chambers Funeral Home in 2003, a few years following his retirement in the Experimental Department at J.I. Case Company. Dan served in the United States Army from 1968-1971, where he was a heavy equipment operator near the South China Sea in Vietnam. Dan and his wife, Francine, reside in Davenport. He has one daughter and two grandchildren.

When Roger Furrow joined Chambers Funeral Home in 2005, he brought with him a wealth of experience in the service industry.

Roger served in the United States Army from 1957 – 1959, and was stationed in Korea. He was then discharged and placed on inactive duty for the next four years. Once a fire fighter for the city of Davenport; Roger retired for the first time as an insurance fire and theft investigator in 2001. Also, for fourteen years, he was a reserve law enforcement officer for Scott County. Shortly after retiring, Roger received certification as an EMT and volunteered with the Medic organization for eight years.

He, along with Art Matje, handle the daily duties at Chambers Funeral Home in Eldridge.

Roger has been married to his wife Donna since 1959 and has three grown children, six grandchildren as well as five great-grandchildren.

Art is a graduate of Worsham College of Mortuary Science and retired in 2000 after more than 40 years as a Funeral Director / Embalmer.  He, along with Roger Furrow, handle the daily duties at Chambers Funeral Home in Eldridge.

Art is a member of The Knights of Columbus where he served as Grand Knight from 1969-1971.  Since 1978 he has been a member of the Eldridge Lions Club; a Melvin Jones Fellow, and was awarded the Warren Coleman Honorary Award.  He Served District MD 9EC from 2010- 2011 as it's District Governor.

He served as a board member for 6 years for the North Scott Community School District.

Art and his wife Susanne are members of St. Anthony Catholic Church in Davenport and just celebrated 50 years of marriage in August of 2014.  They have three sons, ten grandchildren, and two great-grandchildren.

Jim was raised on a farm in south-central Iowa.  He entered the Navy after high school and served from 1958 thru 1961.  Jim came to the Quad Cities in 1962 and has been a Bettendorf resident since 1965. He worked for AT&T and G.E. prior to finding his career in Information Systems for the US Army Corps of Engineers.   Jim retired in 1999 and has found that volunteering for various organizations is very rewarding.

Jim is an active member of St. John Vianney Catholic Church.  He is an Honorary Life Member of the Knights of Columbus Bettendorf Council 4403, where he served as  Grand Knight from 1976-1977.  He is also a member of the church's Men’s Fellowship Group.

Jim and his late wife Shirley were married 54 years.  Jim enjoys spending time with his four children and their spouses, seven grandchildren and one great grand-daughter.

Sue is a 2001 graduate of St. Ambrose University with her degree in Theology. She is an ordained, Commissioned Ruling Elder in the Presbyterian Church (U.S.A.) and serves as our chaplain.  A member of Bettendorf Presbyterian Church, Sue is a  spiritual leader in our community.  She lives in Bettendorf and is blessed to share her life with her son, her grandson and her little furry four-legged companion, Mandi. 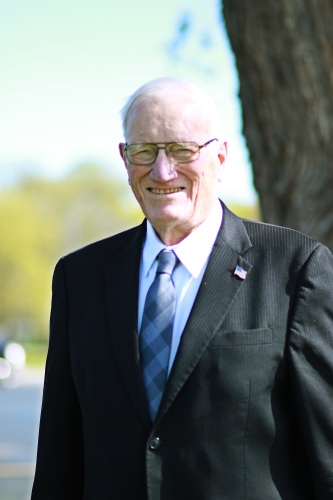 Don began working for W&H Services, our former livery company, in 1993, following his retirement from Alcoa. Don and his wife, Dolores, reside in Davenport and are members of St. Paul the Apostle Catholic Church in Davenport.

Meet with a Director

Meet with A Director